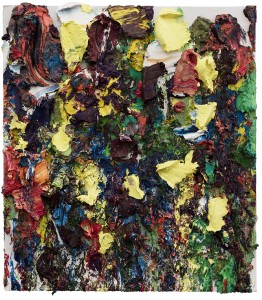 Chicago—Pearl Lam Galleries is delighted to announce its second participation in Expo Chicago, Chicago’s international modern and contemporary art fair, which returns for its fifth edition. The Galleries will present a range of international artists hailing from Asia, Europe, and the United States. In addition, a special project by Ren Ri (b. 1984, China) comprising five beeswax sculptures will be presented in the main exhibition hall. 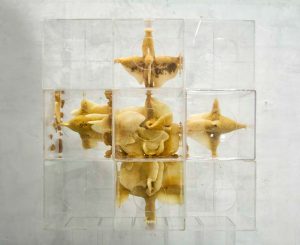 Located in the main exhibition hall, but separate from the Galleries’ main stand, will be a special project by Chinese artist Ren Ri (b. 1984). Ren Ri’s art is signified by the very special medium he uses: beeswax, for which he has received and been nominated for several awards. Considered an unusual and difficult material to work with, Ren’s understanding of bee psychology and nature assist him in his creative process. He works in collaboration with insects to create his mesmerizing sculptures, five of which will be shown set in acrylic cases.

A main highlight of the Galleries’ main stand, 442, will be a work by Chicago artist Carlos Rolón, also known at Dzine, who was the recipient of the Joan Mitchell Award for Painting and Sculpture in 2006 and a grant from the National Endowment for the Arts in 1995. In the past several years, Rolón has been recognized for his elaborately crafted paintings, ornate sculptures and works that come out of Kustom Kulture. The Galleries for exclusively represents Carlos Rolón/Dzine in Asia, having brought his first solo show to the region in Singapore in 2015.

The Galleries will also showcase three works by Leonardo Drew (b. 1961). The sculptural works, made from wood and paint, are drawn from historical evidence. The resulting abstract sculptural compositions are an emotional reflection on the cyclical nature of existence, the human condition, and the connectivity of all things. The artist grew up in a public housing project in Connecticut surrounded by a landfill, an experience which led to his practice of creating work from driftwood and other specially sourced materials.

Other highlights will include the work of Zhu Jinshi. As part of a legendary generation of artists who left China in the 1980s, Zhu Jinshi is widely considered to be a pioneer of Chinese abstract art. During his time in Berlin, Zhu was exposed to Western art movements and experimented with performance, installation, and conceptual forms. His wall-hung works, executed in the mature period of his career, present themselves as low reliefs. The paint is applied with shovels and other heavy-duty implements and the works themselves take several years to dry.

The Galleries will present work by Su Xiaobai (b. 1949), who enrolled himself at Kunstakademie Düsseldorf in 1987 and has spent decades living in Germany. Having been exposed to Western avant-garde art practice, Su sought ways to integrate its methods, techniques, and language to his aim of articulating a quintessentially Chinese perspective. In 2003, he found his answer in lacquer, which soon became his medium of choice. His works focus on essential qualities like color, shape, and texture, which in various combinations produce unique surfaces that range from smooth and sensuous to carved and abraded. Each piece exudes its own history, character, and independent presence. The stand will feature Kuanhou—Joyful Red (2015) and Tile–1510 (2015), two works by Su that showcase jewel-like colors of red and blue. 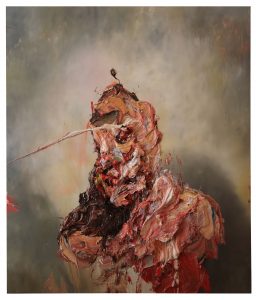 Antony Micallef first came to the attention of the international art scene when he took second prize in the BP Portrait Award 2000, then quickly established himself more widely with his visually charged paintings, which have gradually become less figurative. Though initially guided by his own face in the mirror, his latest series, Raw Intent, is not meant to be read as portraiture. The face only acts as a conduit for exploring the hidden potential of the medium. On display will be Raw Intent No. 4 (2016), in which a form is painted over a meticulously constructed photo-realistic background in the style of the great Western masters of painting, while in Self-Portrait 5 (2015) and Self-Portrait 7 (2016), the entire canvas is covered with thickly applied paint in a visceral red.

The works of Chinese artist Yang Yongliang (b. 1980) take inspiration from Chinese classical landscape painting. Negotiating the “rational” nature of new media with the “emotional” nature of traditional work on canvas, Yang’s works incorporate themes of urbanization and cultural memory. Among his exhibited works will be Artificial Wonderland II—Travelers Among Mountains and Streams, 2014, in which Yang reimagines Song dynasty painter Fan Kuan’s masterpiece by adding modern urban elements to the natural scenery, showing the effects of overcrowding and overdevelopment on natural environments.

Challenging the public’s understanding of painting are works by Italian artist Pino Pinelli (b. 1938), an artist heavily influenced by Italy’s Zero movement. Reflecting on the essence of painting in his Pittura series, Pinelli decreased the size of his canvases, resulting in works that are reminiscent of a microscopic view of the stroke of a paintbrush, or even scattered fragments of a larger canvas that has exploded. His canvases are devoid of brushstrokes. Their velvety surfaces are marked by regular lines and crevices that create and declare depth and form, emulating the act of brush painting on top of the canvas which has already been painted.

José Patrício (b. 1960) uses everyday readymade objects to create patterns and images and is influenced by the geometric and concrete art movements in Brazil. By employing various materials, such as darts, buttons, and nails, the artist abandons their original usage and reassembles them in a new form that results in unexpected formal compositions. The Galleries will exhibit a number of Patrício’s works created between 2012 and 2015.

The Galleries will also showcase works from Korean artist Chun Kwang Young’s (b. 1944) Aggregation series, which combines his early experimentations with Abstract Expressionism with his mastery of mulberry paper, a uniquely Korean material, in his search for a culturally authentic mode of artistic expression. Wrapping individual triangular pieces of polystyrene in hand-dyed mulberry paper, Chun creates the highly textured surfaces of his mesmerizing wall-hung assemblages. While his two-dimensional works emulate painted gradients of color across individually dyed pieces, his three-dimensional pieces are often monochromatic, allowing only tonal changes in color in order to highlight the individual triangles of mulberry paper that protrude from every angle.

Revital Cohen (b. 1981) and Tuur Van Balen (b. 1981), recently held their first solo exhibition in Hong Kong with Pearl Lam Galleries at its SOHO 189 space. Their works allude to the quantities and nature of the materials and the labor used in industrial production. Customers Are Real People and Real Feeling (2014) is a light work that shows a phrase written to the two artists by online vendors who sold the artists the lights used for this piece, which were sourced from the Chinese discount website Tao Bao.

The Galleries also presented the first solo exhibition in Hong Kong of Korean artist Suki Seokyeong Kang (b. 1977). Through different artistic mediums, the artist investigates ancient Asian philosophies and systems in her art. In her video work Black Under Colored Moon (2015), two performers, a man and a woman, interact with a set of geometric Jeong structures in varying sizes, taking part in a silent discourse. The work visualizes the progression of a single day through four chapters, with each unfolding as a variation of movements that serve as a metaphor for the subtle exchanges that occur in an encounter or a parting.

“Pearl Lam Galleries enjoyed a very good reception at last year’s edition of Expo Chicago, which was our first art fair in the United States. As one of the most prominent Asian galleries to be presenting work at the fair, we’re delighted to be showcasing work by a huge range of artists of the highest standard from Asia, Europe, and the United States, including the work of Carlos Rolón/Dzine, who of course hails from Chicago.”