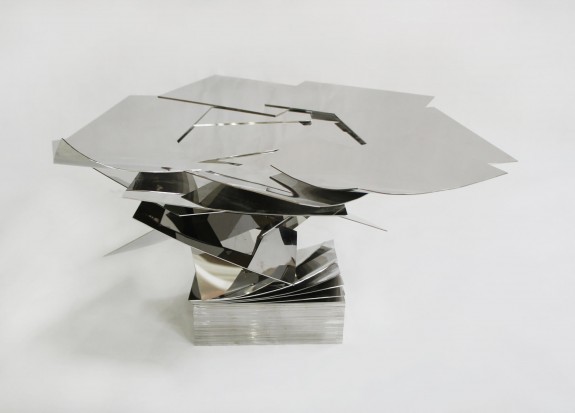 Bosch is an international represented young designer based in Amsterdam, the Netherlands.

The use of common materials, such as cardboard and rubbish bags, with its reference to everyday life, is characteristic of Reinier Bosch’s work. Not just an observation of his daily life in The Netherlands but the life of people in different cultures. A trip through Tibet allowed Bosch to observe spray-painted objects in the streets, of which the surrounding were also colored by the wind. This experience was the starting point of several projects.

At the core of Studio Reinier Bosch’s work is the notion that the universe exists as pure energy.

Some people and objects conduct this energy better than others. Studio Reinier Bosch aims at creating objects that feel good, have the right volume, size, and form, that conduct the energy of the universe optimally. In turn these objects will naturally be nurtured and become family pieces.

No one object has more inherent value than another in the Studio philosophy. A garbage bag is as functional as an Eames chair or a Jackson Pollock painting. It is all about the context in which objects are placed and the possibility of one idea becoming the foundation or building block of another.

We appreciate beautiful objects. An unevenness or flaw in an object also invites a response from the viewer – both beauty and imperfections lead to contemplation and a widening of consciousness. Studio Reinier Bosch would like to trigger this in the viewer, and to create a space for enjoyment of both the material qualities of the objects and the joy of using something physically in harmony with its energy.

To bring out these qualities, the Studio feels it is important to infuse the design process with as much energy as possible. Travelling and working with the best craftsmen are an essential part of the design process. On every level, the joy of the simplicity of creation and the joy derived from action – the pouring, ripping, cutting apart – creates the objects of Studio Reinier Bosch.