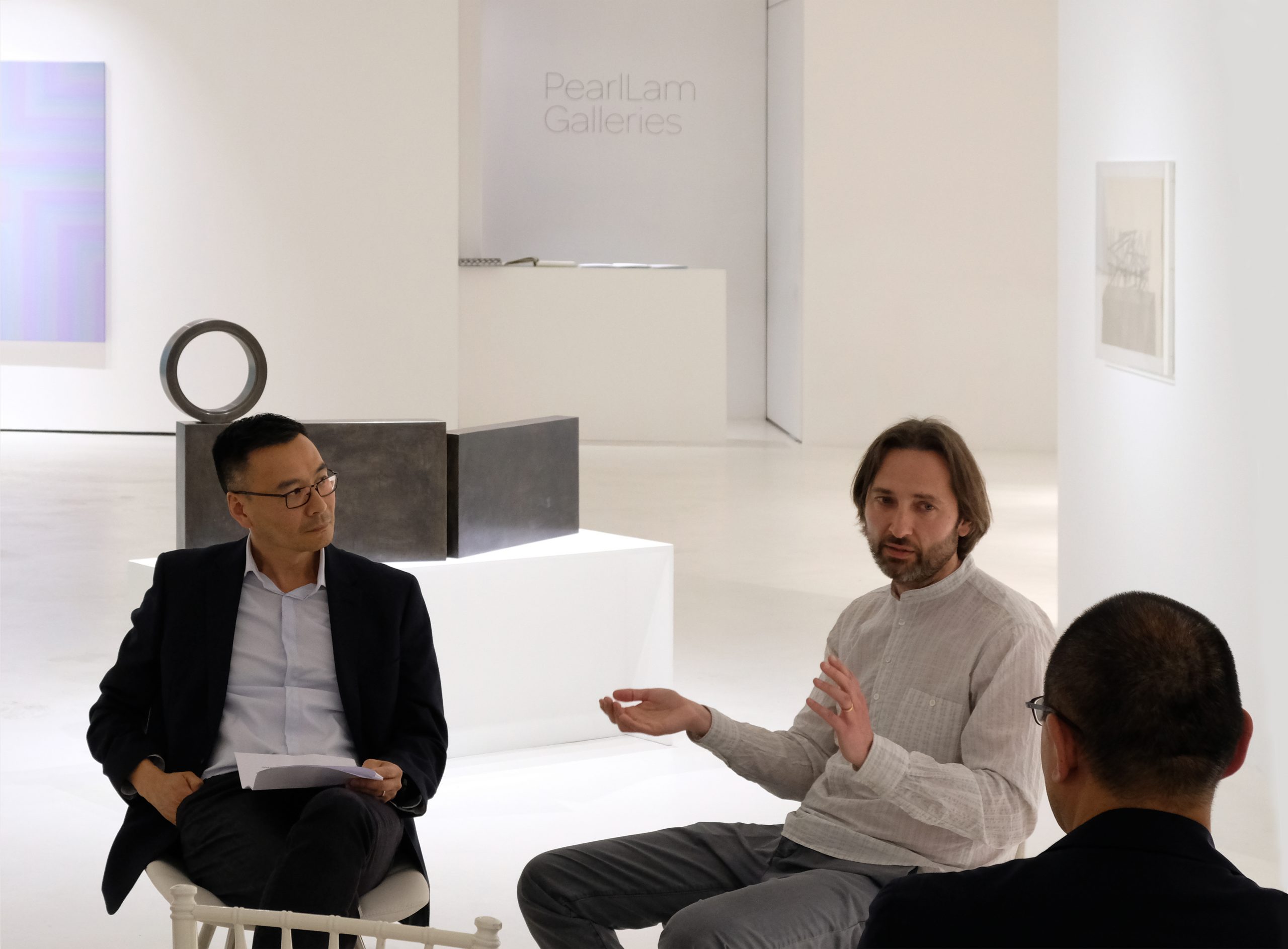 DC: Kazimir Malevich, the Suprematist artist, pursued a new realism painting using non-objective creation or in his words: “I transformed myself in the zero of form and emerged from nothing to creation.” To what extent is his idea or the avant-garde movement still relevant to painting now?

PP: Malevich’s most radical gesture with Suprematism was to present painting conceptually as pure rhythm. He says somewhere that Suprematism is like the symbols of ancient peoples – which were not merely ornaments, but things based on the expression of rhythms. That desire in Malevich to expose the rhythmic is perhaps what makes his work most relevant for painting. It’s about sharing a lived experience of time that is tightly bound up with negation – the negation of the object – as a means of expression.

DC: Going back for a moment to your comment about a Modern fixation on clarity – can you elaborate more on the notion of blindness in relation to abstraction and architecture?

PP: The more one analyses and sees dissected parts for themselves – the blinder one is to the borderlines where the parts meet. In Modernity, I think there arrives a much broader awareness of a ‘blind spot’. The new accelerated actual division of things – terrain, architecture, space in paintings – becomes doubled with a kind of shadow operation, where nothingness is also being divided in an obsessive way.

DC: What was the process of making the artworks for Country 10 at the Kunsthalle Basel? The artworks in this exhibition, in many ways, respond formally to Futurist artists. Furthermore, you re-edited a 1965 BBC documentary on demolishing a building of artist studios titled 28b Camden Street in London. What was the intention behind including a documentary in this exhibition?

PP: The paintings in the exhibition were predominantly black, several had titles relating to housing and cities – they were all improvised. I worked on them very heavily until a linear structure that I liked appeared, and they got their energy from that way of  organising composition – the friction between the painting and repeated effacing of forms. There was also a room of drawings on paper – very detailed and slow to make with the aid of a magnifying glass.

We found out that my grandfather Peter Laszlo Peri had exhibited at the Kunsthalle before the war, so he was already a presence in the exhibition. He narrates 28B Camden Street as one of the artists evicted from the studios. The overriding theme of the film is destruction and regeneration dissociated from time. I remember including my silent edit of the film in the exhibition because I wanted to juxtapose different temporalities – the film’s reproduction of dissolution against the manual processes of my work.

DC: Why did you title your 2014 solo exhibition at the Pearl Lam Galleries in Singapore The Reign of Quantity, and what were the intentions behind the series of paintings presented there?

PP: I was thinking a lot about painting in relation to different conceptions of time; cyclical, absolute, entropic, relative, virtual. Around 2012 I began to make paintings with masses of hand ruled lines. My idea was that the paintings would have a kind of separateness; they would gain autonomy if they got their point of perspective from accumulations of their internal marking out of space. The repetitive accumulation, the number of lines, made me think of the esoteric writer Rene Guenon and his idea of Modernity as The Reign of Quantity – a phase of materialistic degradation in the cycle of history.

I decided to use one of Guenon’s metaphysical formulas; cross = helix = sphere, as a geometric theme for the Singapore paintings. All nine compositions follow a horizontal movement of stacked lines interrupted by a vertical black strip – each painting’s colours vibrate differently as individual stations within that horizontal movement.

DC: I want to direct the following question towards your recent exhibition titled Quarters at Pearl Lam Galleries, H Queen’s. The exhibition concept was originated while you were doing a residency in Miami and observing the movement of the moon. Another inspiration for this show was the 28 lunar Chinese mansions? How did these ideas come about and connect?

PP: I often get insomnia, and in Miami, if I woke up at night, I’d go and sit outside on the balcony. The apartment was high up, right on the beach, so the view was only the sea, sky and moon. I was struck by the variety of the moon’s different aspects each night; changing size, brightness, position in the sky. It made me think about the moon’s orbit as a whole, and I got the idea that its path was actually its real body, the daytime breaks in time between my views of it were physical cuts into something continuous and corporeal.

I started to think about how this might be expressed in a series of abstract paintings. I decided to use the number relationships of the traditional lunar calendar and the 28 mansions as parameters for the group — each painting composed of a central square surrounded by lines radiating outwards in rotating bands of colour. The first painting I made with a central square like this was almost monochrome, grey and beige against a black ground, but in the Hong Kong paintings, the colour spectrum takes over from black as a matrix.

DC: Can you tell us the process for making the new series of paintings and figurative sculptures for Quarters?

PP: The paintings are of uniform height with slightly differing widths; they all have the same composition, so the first decision I made with each one was the choice of colours: a spray paint ground and three or four marker pen colours for the lines. I decided the colour schemes through trials on other canvases. Then, I chose a number between 1 and 28 in combination with the numbers 12 and 4 to dictate the rhythm of the lines’ succession; the central square itself was always 28 cm in each direction. Once the canvas was covered out to the edges, the final thing was to choose a new delineating colour around the empty square to make it sing.

I start a sculpture by arranging ordinary boxes and rolls of tape, things from my home or studio, into relationships that interest me formally and as underlying representations of figures. There’s no construction involved, no fixing or cutting – just placing one thing on top of another using balance. The dimensions of the construction are then measured to within 0.5 of a millimetre and reproduced manually by a craftsman in steel plate; the steel volumes are welded together in the finished sculpture.

DC: The title Quarters refers to our desire for dwelling. The presentation of 2 dimensional and 3-dimensional artworks in fact, questions our assumption of art as a vessel for depositing human intellectual history, but somehow you turn this idea back on itself. According to the Marxist philosopher Ernst Bloch: “Painting ultimately is a subject/object relationship which points to a possible mutual exchange of countenance, remains logically a frontier notion and metaphysically a frontier ideal.” What would you like to achieve with the bipolar subject/object relationship that you have set up in this exhibition?

PP: The nightly encounters with the moon made me think of face-to-face meetings like the mutual exchange of countenance that you mention in the quote from Bloch. I remember looking at Egyptian sculpture in London at the British Museum and feeling a need to face up to the sculptures, being definitely held by each of the four planar views. There was an intimate interchange going on between the four elevations and me that seemed to have its own presence. My aim in the Quarters exhibition was to use the divergences between sculpture, painting, and drawing to complicate the play of forces of a zone of interchange like that – to hold the viewer engaged in it.

DC: During an early discussion on this show, you mentioned Bela Tarr’s Werckmeister Harmonies as a key influence on your recent work. I find the plot of Werckmeister Harmonies extremely relevant to the lunar calendar, and the need to reinvent new ways for making abstract art with the use of subversion and denial.

PP: The film’s opening scene shows drunken countrymen in a pub performing as human embodiments of the sun, moon, and earth – they turn in circles to enact a lunar eclipse, remaining enclosed in their bodies but dancing a scene set in the pure silence of space “where all is relative”. Tarr highlights both the pathos of their isolation and the essentialness of their perspectives – they are stations, frequencies, and frames. The film’s title, Werckmeister Harmonies, refers to an abstract tonal order applied to sound in music theory – the film as a whole is, I think, about the individual’s relationship to order. Abstract art remains meaningful when it addresses this relationship.