Hou Shan belongs to Wang Tiande but it is not alone. The collections in Suzhou Museum together with its contexts and histories make “the mountains in front” for this exhibition. In the Hou Shan exhibition, ancient landscape paintings echo with contemporary landscape paintings, mountains in paintings echo with mountains in reality. It is right now and right here that the distinction between past and now begins to disappear, that the traditional and the contemporary begin to re-connect.

Hou Shan presents more than 30 paintings, installations and video artworks created by the artist in 2014, including the authentic artwork of Wen Boren’s Association in Xi Shan, Yi Bingshou’s calligraph, stelae and monotypes collected by the artist in Su Hang area in recent years. 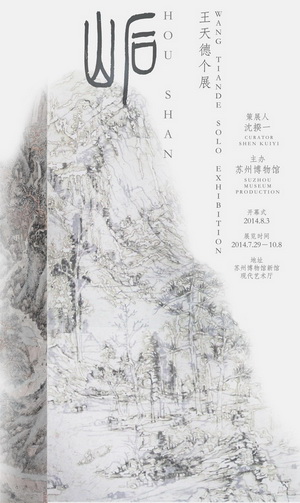 Hou Shan (the mountain behind) is partly hidden and partly visible.When looking at Wang Tiande’s Houshan Series, the upper layer bast paper clouds the ink mountains in the back, like a mist which takes a while for the viewers to get used to. As one is ready to explore into the ink mountains following the path, the burned marks would cut in and bring one’s view back to the negative landscapes front.But one could not stick to the upper layer because the sight of the incomplete forms of the bower under a pine tree would then drive one to seek the similar in the ink mountains behind the mist. In such alternate view of the two layers, one is easy to get lost.

Wang Tiande paints the ink landscape in Huang Gongwang’s style, and the upper layer burned landscapes are out of an accident years ago that cigarette ashes fell onto a piece of paper. From then on, theartist began to paint using incense and developed his signature visual language. As one of the representative artist of the experimental ink movement, Wang Tiande sticks to the aesthetics of traditional Chinese ink painting while conducting conceptual experiments with alternative materials. In his recent HoushanSeries, the artist mounts his burned landscapes side by side withmonotypes or authentic ancient calligraphy, creating a strong arthistory style.

The other clue lies in the landscapes and gardens in the Su Hangarea. The south Yantze river area has in history gathered literatiand artists, developing a long cultural traditions rooted in thelocal landscapes. On one hand, they become part of the artworkssuch as the Monotypes from the Temple in Xi Shan and MonotypesRecord of the Xian Xian Lian Zi Ci. On the other hand, they provide inspirations to the artist as well.

The artist ‘customizes’ a new work based on the concept of”borrowing view” for this exhibition in the New Suzhou Museum whose architecture incorporates ideas from the Chinese garden. As a keyconcept in Chinese garden theory, “borrowing view” has twoapplications. On one hand, it means to incorporate the localnatural landscapes when choosing site. On the other hand, it means to select and organize the garden view when designing the structures, aiming to produce more twists and variations for the walker in the garden. Both applications are reflected in ImitateWen Boren’s Association in Xi Shan Series. On one hand, the artist”borrows” Wen Boren’s authentic painting into the exhibition. On the other hand, the artist “borrows” Wen’s way by re-creating details of the landscapes with “burned mark and ink” into new series, aiming to open up a conversation between the contemporary artist and the old literati.