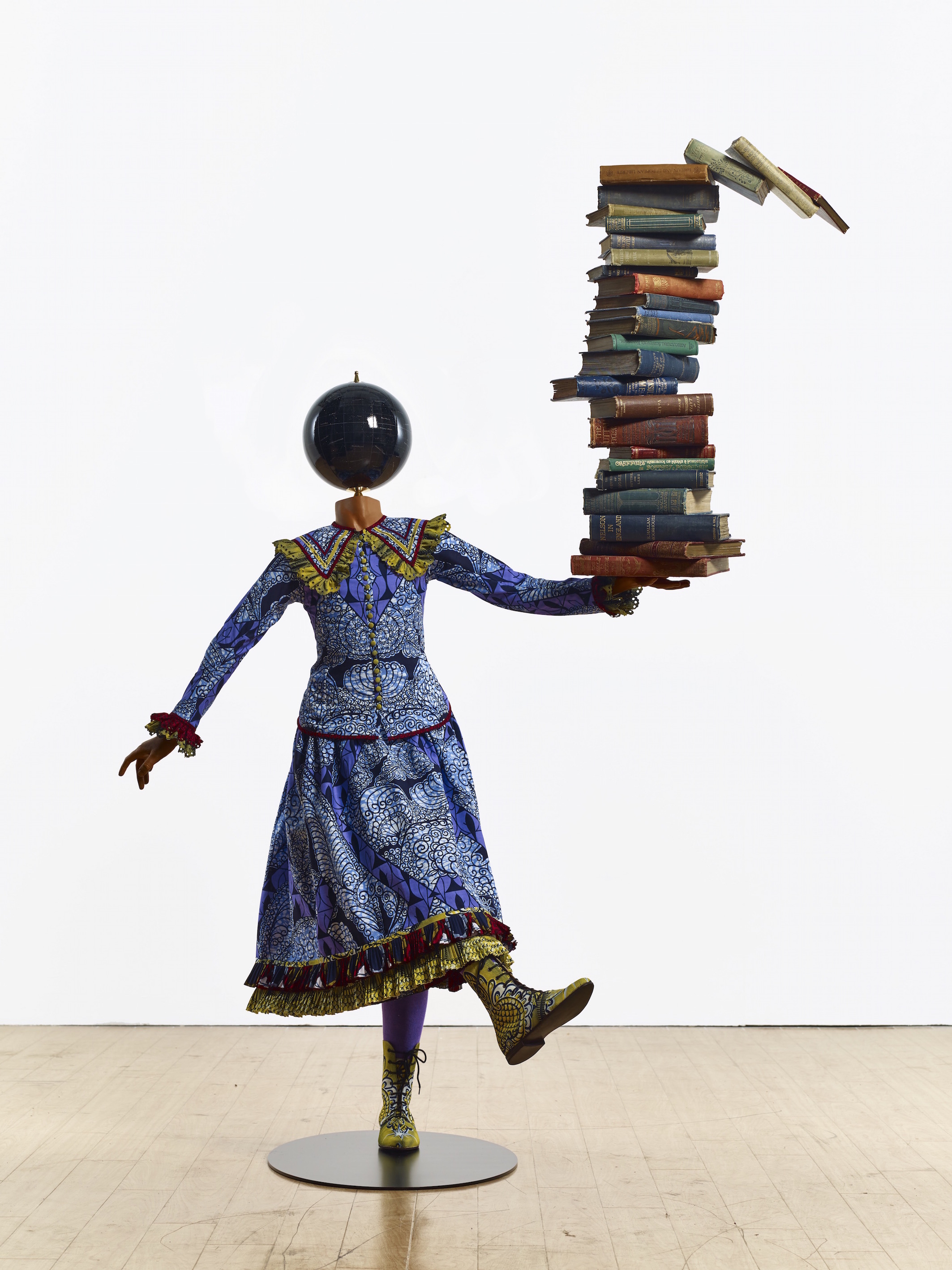 Yinka Shonibare CBE was born in 1962 in London and moved to Lagos, Nigeria at the age of three. He returned to London to study Fine Art first at Byam School of Art (now Central Saint Martins College) and then at Goldsmiths College, where he received his MFA.

Shonibare’s work explores issues of race and class through the media of painting, sculpture, photography, and film. Having described himself as a “post-colonial” hybrid, Shonibare questions the meaning of cultural and national definitions. His trademark material is the brightly coloured “African” fabric he buys at Brixton market. The fabric was inspired by Indonesian design, mass-produced by the Dutch and eventually sold to the colonies in West Africa. In the 1960s, the material became a new sign of African identity and independence. 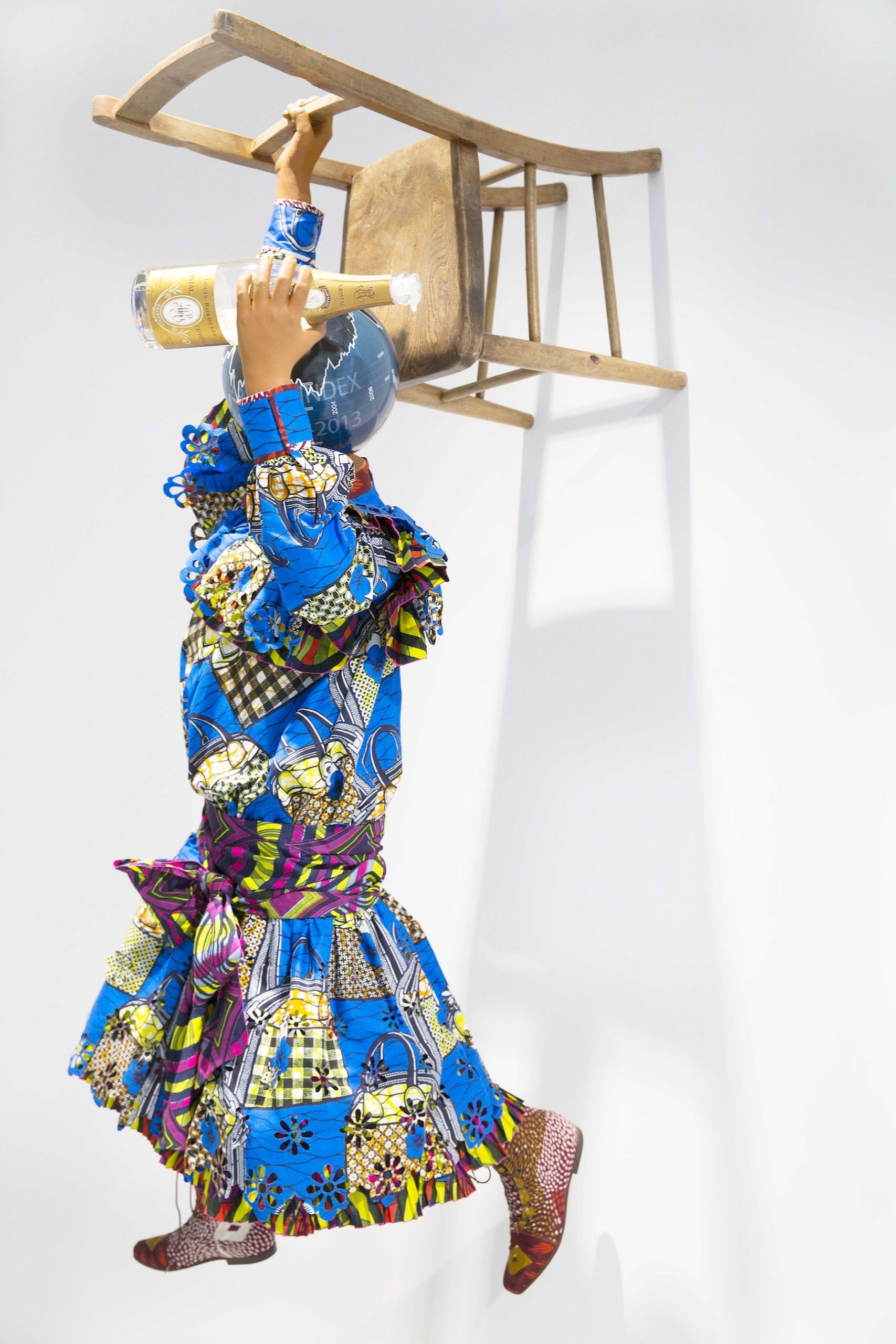 In 2004, Shonibare was a Turner prize nominee and was also awarded the decoration of Member of the “Most Excellent Order of the British Empire or MBE. In January 2019, he was awarded the decoration of Commander of the Order of the British Empire or CBE. Shonibare was notably commissioned by Okwui Enwezor at Documenta 10 in 2002 to create his most recognized work, Gallantry and Criminal Conversation, that launched him on to an international stage. He has exhibited at the Venice Biennale and internationally at leading museums worldwide. In September 2008, his major mid-career survey commenced at the MCA Sydney and then toured to the Brooklyn Museum, New York and the Museum of African Art at the Smithsonian Institution, Washington, D.C. He was elected as Royal Academician by the Royal Academy, London in 2013.

Shonibare’s work Nelson’s Ship in a Bottle was the 2010 Fourth Plinth Commission and was displayed in Trafalgar Square, London until January 2012. It was the first commission by a black British artist and was part of a national fundraising campaign organized by the Art Fund and the National Maritime Museum, who have now successfully acquired the sculpture permanently for display outside the museum’s new entrance in Greenwich Park, London. In 2014, Doughty Hanson & Co Real Estate and Terrace Hill commissioned Wind Sculpture, which is installed in Howick Place, London. Measuring 6 metres by 3 metres, it explores the notion of harnessing movement through the idea of capturing and freezing a volume of wind in a moment of time.

In 2017, Wind Sculpture VI was featured in the courtyard of the Royal Academy of the Arts, London as part of the Royal Academy Summer Exhibition. Shonibare was also commissioned by the Yale Centre for British Art to create Mrs Pinckney and the Emancipated Birds of South Carolina for inclusion in Enlightened Princesses: Caroline, Augusta, Charlotte, and the Shaping of the Modern World, which went on display at Kensington Palace, London in 2017.

The Wall Street Journal has published a report on what to expect at Art Basel in Hong Kong, Pearl Lam Galleries Artist Y...

Artdesk posts 10 questions for artist Yinka Shonibare MBE. The artist talks about his ambitious new work and tells us wh...

Following the trend of so many famous artists doing their ‘first solo in Asia’, Yinka Shonibare opens Dreami...

Utterly amazed by the vibrant colors of the faceless figure bending down with countless cakes on his back just as I ente...

While Hong Kong is one of the world’s wealthiest cities, a fifth of its population is classed as poor, and more th...